As one of China's main fossil energy sources, coal has a comprehensive and diverse industrial structure derived from it. The coal chemical industry has made great contributions to the sustainable development and strategic needs of China's national economy all the time.

As an indispensable device in coal chemical plants, higher technical requirements and independent development capabilities should be put forward for a ball valve. We can learn from foreign advanced technology, and then deepen and optimize it. Carry out technological innovation. Develop new products and reduce valve design and manufacturing costs; strictly control the valve's quality; increase the valve's added value, and gradually replace imported valves, realizing valves being made in China.

1. Structural analyses and improvements
1.1 The sealing structure of the valve seat
The structure of the hard sealing pair of the ball valve is shown in Figure 1. A double valve seat structure has double block and bleed functions, that is, a DBB function. It also has a design of self relief and self cleaning. The valve seat and sphere are matched and ground, and belt shaped sealing can achieve the purpose of zero leakage. Multiple surface coatings are available, dynamic compensation, pressure difference balance and functions of anti-lock failures are designed for springs. A slag-proof structure is designed for the valve seat, which can effectively prevent the coal powder or coal slag entering the valve seat’s sealing cavity from the valve cavity and flow channel.

Compared with the combined valve seat structure of ordinary ball valves, the structural design of this valve seat combines the special working conditions of the coal chemical industry and targeted optimization design is carried out. The integral valve seat is adopted, and the graphite ring, compression ring, disc spring, convex compression ring, dustproof graphite ring, and concave compression ring are hidden inside the valve seat. Its advantage is that it not only ensures the original function of the valve seat, but also reduces the leakage of the medium when it passed through the static sealing surface, avoiding the scouring of other parts by the particle medium and simplifying the dust-proof structure of the spring cavity. Meanwhile, the overall sealing structure is more stable. The valve seat channel adopts a streamlined design, which makes the fluid resistance smaller, eliminates structural dead ends, and reduces the accumulation and scaling of media. It is especially suitable for two-phase fluid media mixed with hard particles.

The valve seat's pre-tightening force is provided by a disc spring. No matter how the temperature and pressure change, it always gives a thrust to the valve seat, which can not only ensure the sealing performance of the valve under low-pressure conditions, but also repair the wear of the sealing surface, making sure the leakage of the valve seat meets the requirements. The number of disc springs of spring cavities can be flexibly designed according to the valve's working conditions: ① They can be used alone. ② They can be superimposed. The spring's pretightening force is unchanged, but can provide greater spring deformation to compensate for wear of the sealing surface due to machining errors and long-term operation under high temperatures and high pressure, ensuring that the sphere and sealing surface are always matched. ③The superposition is adopted, and the spring deformation is unchanged, which can provide greater spring pretightening force and make up for the shortcomings of insufficient pre-tightening force of the spring after long-term use. The combined structure of the spring cavity is shown in Figure 2.

Figure 2 The combined structure of the spring cavity 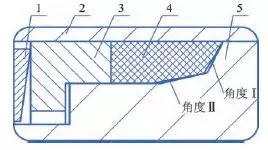 To prevent solid particles from entering the back sealing area of the valve seat and affecting the sealing performance of the valve, in addition to adopting the scraper structure design of the valve seat and scratching the sealing surface of the sphere in the opening or closing process, the anti particle valve seat design is also adopted. The back of the seat is sealed with a double-layer dust-proof graphite ring with a concave and convex compression ring structure, which prevents the particulate medium from scaling and blocking after entering the spring cavity under the pretightening force of the spring, causing the spring to fail. The joint between the dustproof graphite ring and concave compression ring is designed as a tapered surface with a certain angle, which can realize the self-sealing function. While increasing the sealing contact area, it is also subjected to the thrust of the disc spring to form an oblique extrusion force. The greater the pressure is, the better the self-sealing effect becomes. The dust-proof structure of the valve seat is shown in Figure 4. 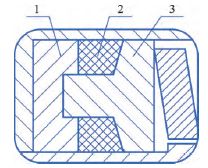